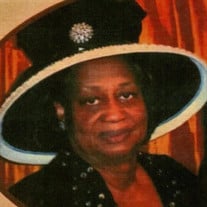 Pastor, Overseer Sarah M. Hicks, was born July 31, 1935, in Warrenton, North Carolina, to Willie and Mary Davis Bryant. She was the first of three children born to this union. Our beloved Pastor and Mother departed this life on May 10, 2022. On July 28, 1956, Sarah M. Hicks married the late Deacon, William Henry Hicks. To their union, a son was born, Raymond Hicks, whom she loved dearly. The Hicks family first made their home in Paterson, New Jersey; it wasn’t until years later that they would return to Georgia permanently; (Deacon Hicks’s home state). As a child, Sarah confessed Christ as her Lord and Savior. It wasn’t until February 1962 that she was Baptized and received the gift of the Holy Ghost. There was a Holy Calling over her life, and she struggled with it. She would never have dreamed that God would have called her to the ministry, but God said otherwise. In 1979 she accepted her Holy Calling, and God began working miracles through her. “In 1985, God called and anointed then Minister Hicks; to be a Pastor after his own heart, a leader of his flock, and a watchman on the wall. Through her obedience to God, she accepted her calling as a shepherd, and Shekinah Temple Deliverance Church, Inc was founded and built in 1989 with seven members.” Pastor Hicks went on to become Overseer of The Greater Highway Deliverance Ministries Georgia District. She embraced her role as Pastor/Overseer with reverence and humility. She will be remembered as a leader that gave wise, Godly counsel and support to those in need. Pastor Hicks was a God-fearing woman. She was best known for “telling it like it is.” She was authentic. She preached the unadulterated, un-compromised word of God. Pastor Hicks didn’t believe in sugar-coating things. She stood for truth and holiness and didn’t waiver. She loved God and her church family. Sarah Hicks was more than just a Pastor and Overseer; having only given birth to one biological child, Sarah became a surrogate mother/foster parent to many. In her early years, it was not uncommon for her loving home to be filled with laughter and children playing; she invested her time, attention, and love in the well-being of hurting children. As grandmother, she was a Giver/Spoiler; she was loved and actively involved in the kids' upbring; she loved her grandchildren. As an older sister, Sarah Mae, as family members affectionally called her, was a confidant, counselor, and one you could always count on. Although the family she was born into was small, they had strong bonds of love and devotion to one another. Auntie Sarah was quick-witted and funny. She always had interesting long stories to tell. Her conversations challenged you and made you think. She would always encourage you to do better and be better. She was known for open-door hospitality and good late-night conversations. As Mother (Aka. “Shaft”), she and her son Raymond had a special bond; everyone that came in contact with them knew this. He was her travel buddy, co-labor in the gospel, and business partner. She was proud of the man he became, and without a doubt, he knew how much she loved him. Finally, as a Wife, Sarah and William Hicks shared nearly 64 years of marriage. Her love and devotion to her husband was genuine. Pastor Sarah Hicks was preceded in death by her parents, Willie and Mary Bryant; her loving and supportive husband, William Henry Hicks; her two sisters Cora Lee Baker and Doreatha Edwards, and God-son Dennis Bryant. Today, she leaves to cherish her memory: Son Raymond Hicks, daughter-in-law, Dirona Hicks; three grandchildren, Raymond Andrew Hicks, Russ Alan Hicks, Raigan Reynolds, and spouse Dariel Reynolds; two great-grandchildren, Railyn and Rylee Reynolds; the Shekinah Temple Deliverance Church family, and a host of other relatives and friends. Pastor, Overseer Sarah Hicks will be greatly missed, but her spirit will live on in the many lives she touched. Her family finds comfort knowing she’s in the presence of Almighty God. Funeral services for Pastor Sarah Bryant Hicks will be conducted Monday, May 16, 2022, at 12 Noon from the Shekinah Temple Deliverance Church. Burial will follow in Westwood Gardens. The family will receive friends Sunday from 3-5 PM at Haisten McCullough Funeral Home. For online condolences please visit www.haistenmcculloughfuneralhome.com. Haisten McCullough Funeral Home, 1155 Everee Inn Road, Griffin is in charge of arrangements.

Pastor, Overseer Sarah M. Hicks, was born July 31, 1935, in Warrenton, North Carolina, to Willie and Mary Davis Bryant. She was the first of three children born to this union. Our beloved Pastor and Mother departed this life on May 10, 2022.... View Obituary & Service Information

The family of Pastor Sarah M. Hicks created this Life Tributes page to make it easy to share your memories.

Send flowers to the Hicks family.