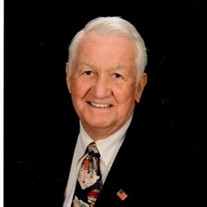 Ronnie Ponsell, age 81, of Griffin and St. Simons Island, GA passed at WellStar Regional Hospital on March 14, 2020. The son of Laura Ponsell Edwards and David Earl Ponsell, Ronnie was born in Brunswick, GA. He was preceded in death by both parents and stepfather Ross Edwards, sisters Billy Plumber, Sandra Parker, Diane Parker, stepsister and brother Barbara Weaver and Ross Edwards. He was a 1957 graduate of Glynn Academy High School and worked for Georgia Power for 35 years. He helped build power plants all over Georgia and was Building Manager for the Georgia Power Office in Atlanta in the last few years of his career. After retirement, he worked for Williams Environmental Company for several years. He was an active member of the First United Methodist Church, singing in the choir and participating in the Forum Sunday School class. He was Secretary- Treasurer of the Kiwanis Club of Spalding County, a member of several golf groups, participated in several social groups including the Tuesday Morning Breakfast Club and had an extensive number of friends. He loved his church, his family, friends, golf, playing cards and traveling with his wife of 58 years. He was a member of AA and received his 21st year chip this month. As most of his friends know, he loved making pound cakes that he shared with many. He is survived by his wife Juanda Newbern Ponsell, son Steve and wife Angie Ponsell, daughter Shannon and husband Dave Parkerson, grandchildren, Spencer Ponsell, Ella Ponsell, Jordan Parkerson and Lauren Parkerson, brother David and wife Jackie Ponsell, Sister Debra and husband Johnny Patterson. A private family interment will be held Saturday, March 21 at the First United Methodist Church Memorial Garden. Due to the COVID-19 status, a memorial and celebration of life will be held at a later date. In lieu of flowers, donations can be made to the First United Methodist Church, 1401 Maple Drive in Griffin, GA. 30224. Donations will be used for purchase of a new sound system for the church. Haisten-McCullough Funeral Home is in charge of arrangements.

Ronnie Ponsell, age 81, of Griffin and St. Simons Island, GA passed at WellStar Regional Hospital on March 14, 2020. The son of Laura Ponsell Edwards and David Earl Ponsell, Ronnie was born in Brunswick, GA. He was preceded in death by both... View Obituary & Service Information

The family of Ronald Spencer Ponsell created this Life Tributes page to make it easy to share your memories.

Send flowers to the Ponsell family.