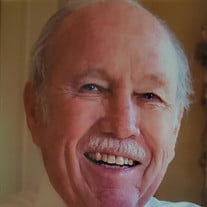 Mr. Robert Paine Shapard, III, known as Bobby to his family and friends, died on Thursday, Mar. 14, at age 88. Bobby passed away peacefully, surrounded by his family in the home that he and Virginia, his wife of 61 years, built together. Bobby was a truly devoted and giving husband, father, and grandfather. Bobby was born in 1931 in the old Strickland hospital in Griffin. He graduated from Sewanee Military Academy in Tennessee in 1949. He earned a degree in textile engineering in 1953 from North Carolina State University, where he was a member of the Kappa Sigma fraternity. After college, Bobby served as a first lieutenant in the U.S. Air Force between 1954 and ’56, helping to design textile materials such as flight suits for pilots in Dayton, OH, and Baltimore, MD. He was also stationed in Alaska for part of this time, where he helped design the first space suits for American astronauts. The year that he left the Air Force, Bobby met Virginia “Ginger” Muller in Lynchburg, VA, on a blind date. They fell in love quickly and were married in 1957. They were devoted to one another for nearly sixty-two years. Bobby joined his father, R.P. Shapard Jr., and brothers in the textile business in Griffin. He worked first as vice-president of Spalding Knitting Mills, and succeeded his father as president in 1994. He also was president of Pittsburgh Knitting Mills in South Pittsburgh, TN, for nearly forty years. He joined the Rotary Club of Griffin in 1956, and served as president for the 1972-73 term. Bobby had perfect Rotary attendance for more than sixty years. He was a founding director of the Bank of Griffin in 1967, and a lifetime parishioner and former vestry member at St. George’s Episcopal Church. Bobby and Ginger were also longtime supporters of Randolph-Macon Women’s College in Lynchburg, VA. Bobby was skilled as a carpenter, and he was also an avid cattleman, raising prize-winning Polled Hereford cattle on his Jackson Road farm. He chased his cows, ran fences, cut hay, and plowed fields at every opportunity, usually out-working any younger people helping him. Survivors include his wife, Virginia; daughter Virginia and partner Stacey of Griffin; son Rob and wife Sarah of Chapel Hill, NC; daughter Christy and husband Jay Sherman of Fallbrook, CA; son Lloyd and wife Rosa of Griffin; grandchildren Kat and Christina Martin of Griffin, Ella and Samantha Shapard of Chapel Hill, Alexandra and Jacob Sherman of Fallbrook, and Holland Shapard of Griffin; sister Sally and husband Lewis Hill of Tampa, FL; brother John and wife Lillian Shapard of Griffin; sisters-in-law Mary Ann Shapard and Marty Shapard of Griffin; and a large family of nieces, nephews, cousins, and in-laws whom he deeply loved. Bobby was preceded in death by his brothers William H., Richard M., and Herbert F. Shapard. Funeral services will be held Sunday, Mar. 17, at 3 pm at St. George’s Episcopal Church, 132 North 10th St. in Griffin. After a graveside service, the family will welcome all friends and family at the Shapards’ home on Jackson Road. Haisten McCullough Funeral Home is in charge of arrangements. In lieu of flowers, gifts can be made to St. George’s Church.

Mr. Robert Paine Shapard, III, known as Bobby to his family and friends, died on Thursday, Mar. 14, at age 88. Bobby passed away peacefully, surrounded by his family in the home that he and Virginia, his wife of 61 years, built together. Bobby... View Obituary & Service Information

The family of Robert Paine Shapard III created this Life Tributes page to make it easy to share your memories.

Mr. Robert Paine Shapard, III, known as Bobby to his family and...

Send flowers to the Shapard family.