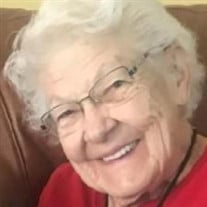 Elva Pauline (Polly) Gaskill passed away peacefully in her sleep on Friday October 29th, 2021. She was born near Blacksville, West Virginia on June 25th, 1930 to the late James Richard Stewart and the late Cora Blanche Stewart. Polly was the youngest of eight children, and is survived by her brother Earl Stewart of Martinsburg, West Virginia, and many nieces and nephews. Polly grew up on a farm in her early life and always carried the memories of that wholesome, hardworking lifestyle with her. She married Grover W. Flowers in West Virginia in 1948 and before long ended up in Hampton, Georgia, raising their three children together until Grover passed in 1964. As a single mother of three at the age of 34 she always managed to get food on the table and clothes on her children with limited resources. This she did with a smile and a positive, can-do attitude that never left her. She is also survived by her children, Rachel Flowers of Fayetteville, GA., Matthew Flowers (Irma) of Tucson, AZ., and Mark Flowers (Jenny) of Griffin, GA. Her grandchildren are Ginger F. Hamilton (Alex) of Griffin, GA., Wesley Flowers (Elitia Barnes), Atlanta, GA., Cora Flowers, Griffin, GA., and Simeon Flowers of Tucson, AZ. Her great-grandchildren include Caroline, Elizabeth, Kate and Charlotte Hamilton of Griffin, GA. In Hampton, the Flowers family attended church and school with the Gaskills and they became friends who stayed in contact even after they all went their separate ways. In 1994, after his wife passed, Polly married Bill Gaskill and started a new life in the Portland, Oregon area. The family she acquired as a result of her marriage to Bill enriched her life immensely. The family includes stepson Greg Gaskill (Darlene) of Tulsa, OK., their children Brian Gaskill (Julie) and their six children of Hayward, WI., Laura Muilenburg (John) and their three children of Tulsa, OK., Karen Bickers (Tim) and their four children of Tulsa, OK., stepson Gary Gaskill (Teresa) of Camus, WA., their children Steven Gaskill of Hillsboro, OR., Sandra Wagner (Mark) and their 3 children of Newberg, OR., Alex Gaskill of Everette, WA., and Katee Horak (Travis) and their two children of Tigard, OR., and stepson Tom Gaskill (Ellen) of Loveland, CO. Polly loved people and loved to greet everyone with a hug. She regularly attended religious services wherever she lived, usually in a Methodist church. Her grandchildren and great-grandchildren, and Bill’s grandchildren and great-grandchildren brought so much joy and laughter to her life. She and Bill travelled extensively, were active in their church and community. She was considered by many to be a woman who offered wise counsel to those she knew in their troubled times. She was a loving caregiver to Bill in his final years and after he passed, moved back to Georgia in 2019 to be near two of her children, most of her grandchildren and great-grandchildren. She will be sorely missed by all who knew her. Graveside funeral services will be conducted Friday, November 5, 2021 at 11:00 AM at Berea Cemetery with Reverend Steven Norris officiating. For those who care to make a donation in her name, Polly regularly supported the Wounded Warrior Project. https://www.woundedwarriorproject.org For online condolences please visit www.haistenmcculloughfuneralhome.com. Haisten McCullough Funeral Home, 1155 Everee Inn Road, Griffin is in charge of arrangements.

Elva Pauline (Polly) Gaskill passed away peacefully in her sleep on Friday October 29th, 2021. She was born near Blacksville, West Virginia on June 25th, 1930 to the late James Richard Stewart and the late Cora Blanche Stewart. Polly was the... View Obituary & Service Information

The family of Pauline "Polly" Stewart Gaskill created this Life Tributes page to make it easy to share your memories.

Elva Pauline (Polly) Gaskill passed away peacefully in her sleep...

Send flowers to the Gaskill family.