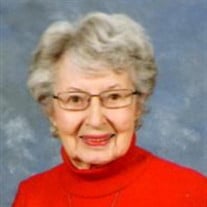 Mrs. Marvel Lee Paull, age 95, passed away on January 3, 2021, at her home in Griffin surrounded by her loving children. Mrs. Paull was born December 12, 1925, in Sedalia, Missouri. She was the daughter of the late Jay Abraham Barnum and the late Pearl Cheek Barnum. She was also preceded in death by her husband, Jack M. Paull; a son, David W. Paull; a brother, Richard Barnum; and sisters Virginia Daw and Jean Gillespie. Mrs. Paull is survived by her daughter and son-in-law, Linda and Ronnie Garrison of Griffin; son and daughter-in-law, Richard and Nancy Paull of Rex; four grandchildren and two great grandchildren. Several nieces and nephews also survive. Although she worked as a secretary during World War II in Washington, DC, she was primarily a homemaker, wife, and mother. Mrs. Paull and her husband loved their family and to play golf and travel together. They enjoyed many fun golfing trips with friends and took a 5-month camping trip in their travel trailer around the USA to celebrate Jack’s retirement. After her husband’s death in 2003, Marve traveled extensively with her daughter, exploring six continents on the dozens of cruises they did together. She loved new experiences and visited 49 states and over 70 countries during her long, full life. When not traveling, Mrs. Paull spent many hours playing bridge at the Spalding County Senior Center. Her bridge friends remember her competitiveness and outstanding memory of the hands dealt and played. Those desiring to honor Marvel Paull may make contributions to the Griffin First United Methodist Church, 1401 Maple Drive, Griffin, GA 30224, where she was a member of the Arthur Maddox Sunday School Class. Haisten McCullough Funeral Home in Griffin is in charge of arrangements, but it was Mrs. Paull’s wish to not have a memorial service because of the possible coronavirus risk to her friends and family.

Mrs. Marvel Lee Paull, age 95, passed away on January 3, 2021, at her home in Griffin surrounded by her loving children. Mrs. Paull was born December 12, 1925, in Sedalia, Missouri. She was the daughter of the late Jay Abraham Barnum and the... View Obituary & Service Information

The family of Marvel Lee Paull created this Life Tributes page to make it easy to share your memories.

Send flowers to the Paull family.