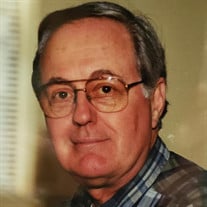 Malcolm Davies, 81, of Macon, Georgia passed away on February 26, 2020. He was born in Gainesville, GA, but spent most of his formative years in Griffin, Georgia. A proud member of Griffin High School’s Class of 1956, Malcolm spent time working in his parents’ ice cream store, Wright’s Ice Cream, played in the marching band and excelled in subjects that led to his acceptance to Georgia Tech. His first job after graduating with a degree in mechanical engineering was at DuPont in Augusta, GA. In 1966 he and his young family moved to Centerville, Georgia where he worked for Robins Air Force base. He spent another 45 years working at the base, part of which was spent on prestigious projects related to electronic warfare. During the seventies Malcolm completed his Masters of Business Administration with honors at the University of Georgia, found time to coach his daughter’s softball team and developed a great desire to research his family origins. He has compiled many papers, photographs, archive records and memorabilia that chronicle over 10 generations of his family’s history. His love of genealogy was only surpassed by his love of God. Malcolm was an integral part of every church he attended over the years, assisting with financial matters, contributing to global missions and leading Bible study groups at church or in his home where he had a vast library of Christian literature. Malcolm was the son of the late Malcolm “Josh” Davies and Virginia Benson Davies, and is survived by his daughter, Carolyn Davies, his sister, Marilyn (Tom “Gene”) Lewis, brothers Jerry (Joyce Ann) Davies and Philip (Tina) Davies, three grandchildren, two great grandchildren and numerous beloved nieces, nephews, cousins and friends. The family wishes to express their heartfelt gratitude for his outstanding caregivers this past year at Taylor County Health and Rehab in Butler, Georgia, Brightmoor Senior Living in Griffin, Georgia, Coastal Home Care of Barnesville, Georgia and Hospice Care Options of Warner Robins, Georgia. Services for Malcolm will be held on Sunday, March 1st, 2020 at 3:00 p.m. at Haisten McCullough Funeral Home in Griffin, Georgia with visitation at 2:00 p.m. In lieu of flowers, feel free to contribute to the organization of your choice on Malcolm’s behalf. Haisten McCullough Funeral Home, 1155 Everee Inn Road, Griffin, Ga. 30224 is in charge of arrangements.

Malcolm Davies, 81, of Macon, Georgia passed away on February 26, 2020. He was born in Gainesville, GA, but spent most of his formative years in Griffin, Georgia. A proud member of Griffin High School&#8217;s Class of 1956, Malcolm spent... View Obituary & Service Information

The family of Malcolm Davies created this Life Tributes page to make it easy to share your memories.

Malcolm Davies, 81, of Macon, Georgia passed away on February...

Send flowers to the Davies family.