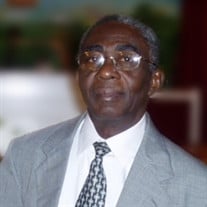 Louis Michel Remy graduated to Glory on January 5, 2020, at the age of 85, at the Spalding Hospital, Griffin, Georgia. He was born to the late Tervicienne Michel and Marcelin Remy in Plaisance, Haiti on October 23, 1934. At an early age, he made the confession of faith and committed himself to serving Jesus-Christ for the rest of his earthly life. Michel was a dedicated member of Ebenezer Evangelical Baptist Church in Port-de-Paix, where he served as a youth minister, and met his sweetheart, Violette. They were united in holy matrimony on April 24, 1962. He was the Pastor of Lewis Memorial Baptist Church in Cazeau, Bethesda Baptist Church, in Port-au-Prince and Bethesda Missionary Baptist Church in Palmiste. Upon accepting the Ministerial calling of God upon his life, and with the assistance of Pastor James S. Rice, the Lord opened the doors for him to attend Gardner-Webb University (a College at that time), back in 1969. Leaving his dear wife and his two children then, Bruner and Idelette, he embarked on a Faith journey to Boiling Springs, NC. Two years later, Violette joined him, and a year later, another son, McFarland was added to the family. 1973, Louis Michel Remy graduated with honor, as Gardner-Webb’s first International student, with a double Major in Ancient language (Greek/Hebrew) and Accounting and a Minor in Religion. While it would have benefited him and his family to pursue a ioulucrative career in the United States, he made the costly, yet rewarding decision to honor God and return home and serve his people in Haiti. Shortly after his ordination as a Pastor in the Summer of 1976, God directed his steps to Cazeau, a remote town close to Port-au-Prince. Unbeknown to him, this would become the birthing ground of his Ministerial endeavors. A year later, Lewis Memorial Baptist Church was founded and dedicated, in memory of his late College professor, Dr. Thurman Lewis. He founded two other churches, Bethesda Baptist Church, in Port-au-Prince and Bethesda Missionary Baptist Church in Palmiste. Louis Michel was a faithful member of the Union of Evangelical Baptist Churches of Haiti (UEBH) and served on their executive board as a treasurer for several years. As an educator, Michel served as the principal of the Ebenezer Evangelical Baptist School in Port-de-Paix, Haiti for over 10 years. He taught Greek, Hebrew and Latin at the Maranatha Christian School and the UEBH Bible College, in Port-au-Prince. Louis Michel Remy was the epitome of an unselfish, loving, caring and disciplinary father and kingdom trailblazer. He was a spiritual father and mentor to many. The imprints of his life have forever marked several lives and generations. He fought a good fight of Faith and finished his race with honor, leaving a legacy to be carried out. Louis Michel Remy is survived by his wife, Marie Violette Remy, the love of his life of 58 years, his children Bruner Remy (Cathy Remy), Idelette Remy, McFarland Remy (Myrdina Remy) and Michelle Remy of Port-au-Prince Haiti; his grandchildren, Jennifer Jordan of Charlotte North Carolina Clifford Remy of Charlotte North Carolina, Brigitte Karine Antoine of Atlanta Georgia, Emmanuel Philip Remy of Macon Georgia; his great-grandchildren Tatyana Jordan and Christian Phipps; his adopted daughter Lourdes Marotiere of Queens NY. Siblings: Lydia Remy of Freeport Bahamas, Elsie Telus of New York, Claude Ferdinand of Haiti, Anne-Marie Augustin of Haiti, Felicita Remy-Dorival. In-laws: Jephte Jean-Jumeau of Colombia South America. Nieces and Nephews: Danielle Adams of Silver Spring Maryland, Gisele Remy-Bryan (Johnny Bryan) of Lawrenceville Georgia, Indiana Remy-Villalobos (Jared Villalobos) of Plantation Florida, Ginna Remy-Davis (Bryant Davis) of Freeport Bahamas, Minouche Feinstein of Miami Florida, Evrardy Telus-Osias (Hugue Osias) of Lakewood New Jersey, Fedna Charles, Mirlande Derival, Milouse Derival, Daphne Rosandburg, Doutchy Geese, Josena Jeanniton of Haiti, and a host of cousins and special friends.

Louis Michel Remy graduated to Glory on January 5, 2020, at the age of 85, at the Spalding Hospital, Griffin, Georgia. He was born to the late Tervicienne Michel and Marcelin Remy in Plaisance, Haiti on October 23, 1934. At an early age, he... View Obituary & Service Information

The family of Louis Michel Remy created this Life Tributes page to make it easy to share your memories.

Send flowers to the Remy family.