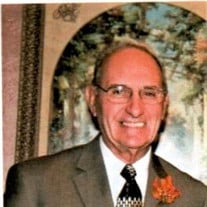 Louis Samuel Edday, Jr, 88, passed away on Monday, July 19th, 2021 at 10:30 p.m. in Griffin, GA. He died peacefully in his sleep. He was born in 1933 in Eminence, KY, the son of Louis Edday, Sr. and Ethel (Wilson) Edday. He served two years in the Army from 1954-1956. He married Nancy Theobald in 1964 in Santa Cruz, CA and lived there for 8 years. He received his ministerial license and ordination with the oneness organization, the Pentecostal Assemblies of the World, and worked closely with his father-in-law, Raymond Theobald, the pastor of Christ Temple church in Santa Cruz, CA. He and Nancy moved back to Eminence, KY in 1972. In 1978, he became Pastor of Eminence United Pentecostal Church. He was a licensed, ordained minister with the United Pentecostal Church International for over 30 years and retired in 2000 after pastoring for 22 years. He also served as Presbyter of the United Pentecostal Church Kentucky District for 12 years. He loved to preach and teach the Word of God and mentored many young ministers to do the same during his tenure. His favorite things, other than church, were his family, gardening, camping, hunting and fishing. He was a carpenter and built both of their homes in which they lived in Eminence. In 2020, he and Nancy moved to Griffin, GA to be near his daughter and family. In addition to his wife, Nancy, Louis is survived by his son, Mark Edday and his wife, Anita, and their children, Drew and Morgan; his son, Douglas Edday and his wife, Pamulla, and their children, Greta, Shay and DJ; and his daughter, Melody Meeks and her husband, Stacey, and their children, Brody and Asher. He is also survived by his sisters, Patsy Edday and Debbie Hedges. A memorial service will be held in his honor on August 21, 2021 in Griffin, GA at Life Church of Griffin at 2 p.m. Visitation will begin at 1 p.m.

The family of Louis Samuel Edday Jr. created this Life Tributes page to make it easy to share your memories.

Send flowers to the Edday family.