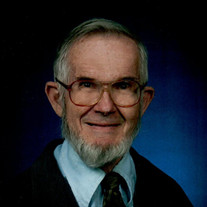 Jasper Guy Woodroof Jr., age 86, passed away at Brightmoor Assisted Living, Griffin, Georgia on January 2nd, 2018. He was born on July 27th, 1931 in Griffin, Georgia. His childhood years found him living in Tifton, Georgia, Cornelia, Georgia, and Griffin, Georgia. Following High School, he enlisted in the United States Air Force where he served during the Korean War as an Aircraft Radio Technician. He met his wife of 60 years, Dorothy Drew Woodroof, in Boston, Massachusetts where they were also married in 1957. He was employed at Lockheed Electronics until a major car accident forced him into medical retirement in 1971. Jasper was an accomplished woodworker, making many pieces of furniture and clocks for family and friends. His real woodworking skills were evident in the many bowls he made on his lathe. He was an avid cyclist. He cycled from his residence in Liberty Corner, New Jersey to Merritt Island, Florida and returned on two occasions, and also made two cycling trips with his wife Dorothy across several European countries while their son was stationed in Germany. He loved to cook and volunteered in the Crestview Baptist Church Kitchen while he was a member there. He had a very inquisitive mind, loved to help people, and was very generous with his time and resources. He had a keen sense of humor and always had a smile for everyone. He was a lifelong Christian and always a faithful church member. Both he and Dorothy credit their relationship with The Lord Jesus for guiding them through many hardships and trials in their lives and marriage. His favorite scripture was found in 1 Thessalonians 4:11 “Make it your ambition to lead a quiet life, to mind your own business and to work with your hands, just as we told you”. He is survived by his wife, Dorothy Woodroof of Griffin; Daughter, Naomi Hard of New Brighton, Minnesota; Son, Jasper Guy Woodroof III of Griffin, Georgia and son, Timothy James Woodroof of Corona, California; Sister, Jane Akers of Oak Ridge, Tennessee, and Sister Cade Smith of Cullman, Alabama. He also has 12 Grandchildren, and 6 Great-Grandchildren. Funeral Services will be conducted on Tuesday, January 9th, 2018 at the Haisten McCullough Funeral Home in Griffin, Georgia. Family Visitation is scheduled at 10 AM with the Funeral Service immediately following at 11 AM. There will be a family graveside service at the family plot in Woodbury, Georgia the same day. Haisten McCullough Funeral Home is in charge of the arrangements.

The family of Jasper Guy Woodroof, Jr. created this Life Tributes page to make it easy to share your memories.

Send flowers to the Woodruff family.