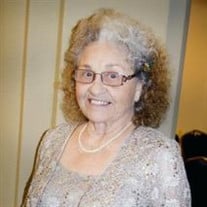 Mrs. Hazel Marie Pillow, age 94, of Concord, passed away on Friday, July 24, 2020 at Piedmont Newnan Hospital. Mrs. Pillow was born in Forsyth County, Ga. on October 6, 1925. She was the daughter of the late James David and Bertha Elizabeth... View Obituary & Service Information

The family of Hazel Marie Pillow created this Life Tributes page to make it easy to share your memories.

Send flowers to the Pillow family.