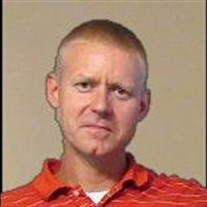 Denver Charles Perkins, passed away on April 5, 2019, at the age of 44. “DB” was born in Savannah, GA on July 17, 1974. Denver was predeceased by his mother and step-father, Oralyn and Jimmy Fields; his grandparents, Charles and Emily Smith, his uncles, Louis Smith, Charles “Bubba” Smith, Charlie Hayes, and his cousin, Scot Evans. He will be sadly missed by his three children, Brittney Lee Wyatt, Jacob Alexander Bethune, and William Kyle Tolar; his father and step-mother, David and Sherryl Perkins; sister, April (Tim) Prosser; step-brothers, Chris (Barbara), Brett (Valerie); step-sister, Jerrie (Craig) Grebeck; his uncle and aunt, Larry and Marie “Toni” Evans; his aunts, Charlene Hayes, Penny Smith, and Rosalyn Boren; and many cousins who loved him deeply. The family will be honoring his life with a small ceremony and would like to thank you for your thoughts and prayers during this difficult time.

The family of Denver Charles Perkins created this Life Tributes page to make it easy to share your memories.

Send flowers to the Perkins family.