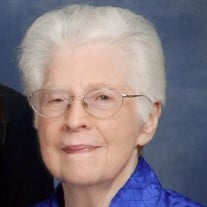 Mrs. Betty Sue Parker Hobbs passed away Tuesday, September 25, 2018 in Henderson, KY. She was 94 years old. She had been a resident of Henderson since 2010, living with her son, the Rev. Dr. Timothy Wilson Hobbs and his family. Betty Sue was born on October 19, 1923 in Perry, Georgia to Mr. Charles E. Parker and Mrs. Della Sue Webb Parker. She grew up in Abbeville, Georgia, attending the public schools there. As a teenager, she met the love of her life, Richard Franklin Hobbs, Jr. She was a graduate of Middle Georgia College where she was the editor in chief of the college newspaper. She and Richard were married on April 19, 1945, upon his return from service during World War II. Together, they raised their family in Griffin, Georgia, and worked side by side in their drug store, Hobbs Pharmacy, until the time of their retirement. Betty Sue created a beautiful gift and jewelry area within the drug store that remained a popular stop for Griffin shoppers for many years. She was an avid gardener, a member of a local garden club in Griffin and loved the art of flower arranging. She was a devoted wife to Richard for 65 years, looking after him until the moment of his passing in 2010. She was a loving mother of three boys. She may have been outnumbered in the Hobbs household, but the power of her motherly guidance was never in doubt. Betty Sue and Richard were members of the First Baptist Church of Griffin. She was preceded in death by her parents, her brother Charles Parker and her sister Bennie Claire Parker Harrison. She is survived by her sons, Dr. Richard Franklin Hobbs, III and his wife Elise of Waterville, Maine; Michael Edward Hobbs and his wife Suzanne of Big Canoe, GA, and the Rev. Dr. Timothy Wilson Hobbs and his wife Susan of Henderson, KY. She is also survived by her faithful and loving sister, Jesslyn Parker Bates of Lake Wales, FL; her loving grandchildren, Christopher Hobbs of Auburn, Maine; Zachary Hobbs (Tina) of Sanford, Maine; Michael Jordan Hobbs (Rachel) of Canton, GA; Mollie Hobbs of Louisville, KY; Rachel Hobbs of Nashville, TN, and Nathaniel Hobbs of Murfreesboro, TN. In addition, she is survived by three great-grandchildren, Jacynda Rousseau of Freeport Maine, Alex Hobbs of Athens, GA and Charlotte Leigh Hobbs of Canton, GA. Visitation will be held at Haistens-McCullough Funeral Home on Sunday, September 30 from 1:00-3:00 p.m. Then a graveside service will be conducted at 3:30 o’clock, p.m. at Oak Hill Cemetery in Griffin, GA. Memorial contributions can be sent to Community Baptist Church, 1026 Pebble Creek Dr., Henderson, KY 42402. To pay condolences online to the family you may do so at www.haistenmcculloughfuneralhome.com. Haisten McCullough Funeral Home is in charge of the arrangements.

Mrs. Betty Sue Parker Hobbs passed away Tuesday, September 25, 2018 in Henderson, KY. She was 94 years old. She had been a resident of Henderson since 2010, living with her son, the Rev. Dr. Timothy Wilson Hobbs and his family. Betty Sue... View Obituary & Service Information

The family of Betty Sue Parker Hobbs created this Life Tributes page to make it easy to share your memories.

Send flowers to the Hobbs family.