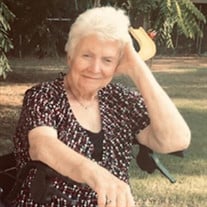 Anne Fosgate Marshall, 80, of Milner, widow of Reverend Thomas Milton Marshall, died Monday, February 8, 2021 in her home. She was born in Indianapolis, IN, January 28, 1941, she was the daughter of the late Louis Fosgate and Vivian Brunner Fosgate. Anne Marshall was a compassionate woman, who derived strength from her belief in God. She formed an intimate connection with God and spent much private time in prayer. A description that aptly fits her is the Hebrew term “אֵשֶׁת חַיִל” (Eishet Chayil) which means Woman of Valor. She was caring, always reaching her hands out to the needy and looking to help those down on their luck. She did this no matter the cost to herself. She had a quiet strength and wisdom which she freely shared with others over the years as they reached out in times of need. Anne loved animals, specifically horses and dogs. Her love of horses began on the saddle of a backyard fence and culminated in the ownership and training of horses. She was a member of the American Saddlebred Association. She competed in Equine competitions, winning the 1987 Hand Model Saddlebred Championship of Virginia and the 1993 Horse Association of Tennessee Reserve Championship. She also enjoyed breeding, raising, and training German Shepard dogs and always had several as constant companions. Mrs. Marshall dedicated her life to the service of the church and was the crowning joy of her husband Tom. She served alongside him as pastor’s wife in service to several churches in Tennessee, as well as a few years spent overseas in missionary work. Anne was hard working and also helped meet family needs as an accountant. She was formerly employed at AeroJet, Sweet Auburn Curb Market and was also head of a family business, The Sterling Connection. In addition to her husband of over sixty years, Mrs. Marshall was preceded by a daughter, Tracie Strother, parents Louis Fosgate and Vivian Fosgate and her brother Tommy Fosgate. Surviving are her children, Debra White and husband Ray of Charleston, SC, Terri Gonzales of Hampton, Tom Marshall and wife Tamara of Griffin and Timothy Marshall and wife Collette of Castleberry, FL along with; fourteen grandchildren; and nine great-grandchildren. She is also survived by one brother, Jim Fosgate of Utah and niece Loni Fosgate. A memorial service will be announced at a later date. For online condolences please visit www.haistenmcculloughfuneralhome.com. Haisten McCullough Funeral Home, 1155 Everee Inn Road, Griffin is in charge of arrangements.

Anne Fosgate Marshall, 80, of Milner, widow of Reverend Thomas Milton Marshall, died Monday, February 8, 2021 in her home. She was born in Indianapolis, IN, January 28, 1941, she was the daughter of the late Louis Fosgate and Vivian Brunner... View Obituary & Service Information

The family of Anne Fosgate Marshall created this Life Tributes page to make it easy to share your memories.

Send flowers to the Marshall family.